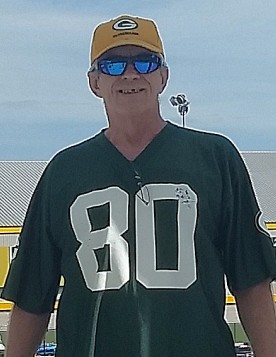 William ‘Bill’ R. Montabon, age 65, of Gleason, passed away unexpectedly on Thursday, November 8, 2018 at Ascension Good Samaritan Hospital in Merrill.  He was the son of the late Kermit and Sue (Oldenburg) Montabon and born on September 20, 1953 in Merrill, WI, and was also the biological son of Richard Bergman.  Bill attended and graduated from Merrill High School.  He enlisted in the U.S. Air Force on May 24, 1973, and proudly served his country until his honorable discharge on August 17, 1978.  He married Linda Lee Bennett on March 10, 1979 in Illinois.

Bill worked as an air traffic controller for the civilian sector for many years.  He also drove truck for B&D Motors in Merrill, hauling windows.  Bill would often take Kevin on his trips around the country, and they enjoyed those adventures together.  He was an avid Packers and Badgers fan, including being a Packers shareholder.  Bill was also a skilled bowler, enjoying getting a game in whenever he could.  He is remembered as a passionate and generous man that was not afraid to speak his mind.  Bill was an elder at Luther Memorial Church in Gleason.

He was preceded in death by his parents and nephew: Robert Montabon.

A Celebration of Life for Bill will be held on Sunday, November 18, 2018 at 12 noon at Waid Funeral Home in Merrill.  The Rev. Gregory Laska will officiate.  Visitation will be held on Sunday, November 18, 2018 from 10am until the time of the service, also at the funeral home.  Inurnment will take place at Merrill Memorial Park Cemetery at a later date.  Military honors performed by the Merrill V.F.W. Post 1638 will take place at the cemetery.  Waid Funeral Home & Cremation Service of Merrill is assisting the family with arrangements.  Online condolences may be made at www.waidfuneral.com.

To order memorial trees or send flowers to the family in memory of William 'Bill' Montabon, please visit our flower store.