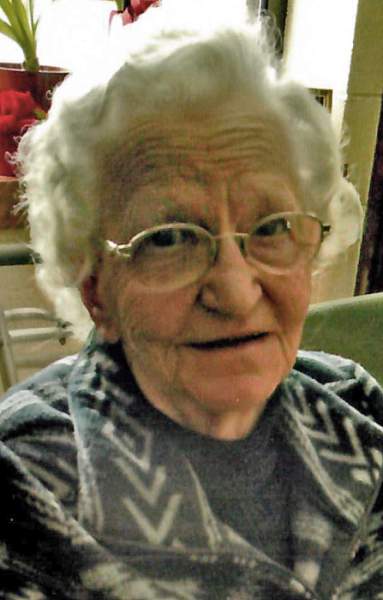 Vearl M. Kleinschmidt, age 93, of Merrill, passed away peacefully on Sunday, September 17, 2017 at Pine Crest Nursing Home in Merrill, while under the care of Aspirus Comfort Care & Hospice Services.

Vearl was a loving and caring homemaker and housewife for over 60 years.  She was a diamond member of The Lincoln County Homemaker’s Club for that entire time.  Vearl also farmed with her husband in the town of Scott.  She adored her family and enjoyed seeing them and spending time with her grandchildren.  Vearl was known to make amazing meals for family gatherings, always making sure that no one left her table hungry!  She also enjoyed her birds, especially cardinals.  Vearl was very fond of her horses.  She spent time with her horses and rode them throughout most of her adult life.  Vearl also had vegetable gardens that she tended to and did some canning from that food.  She also had a talent for sewing, and would frequently make items for family and friends. Vearl was a member of Christ Evangelical Lutheran Church in Merrill.  She was a loving and strong woman that was always ready to give a hug.  Vearl will be sadly missed.

Family wishes to extend their appreciation to the wonderful staff at the Pine Crest Nursing Home.  They went above and beyond and loved and cared for Vearl in so many ways.  Thank you.

To order memorial trees or send flowers to the family in memory of Vearl Kleinschmidt, please visit our flower store.