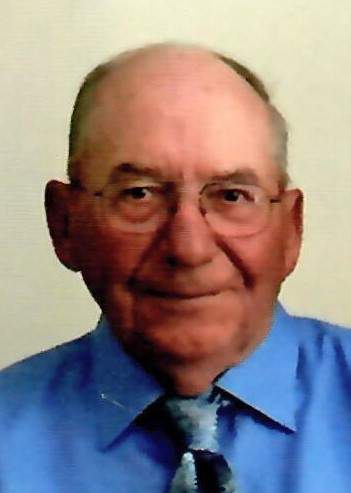 Stanley Allen Wiederhoeft, age 84, of the town of Hamburg, passed away unexpectedly at his home on Thursday, March 10, 2022.  He was born on February 26, 1938, to the late Martin and Edna (Schoenherr) Wiederhoeft at the Memorial Hospital in Wausau. He attended and graduated from Merrill Senior High School with the class of 1956 and went on to attend NTC in the Farm Training Program on April 20, 1978.  Stanley joined the US Army National Guard – Red Arrow Division – and proudly served from 1959-1964.  He was stationed in Fort Louis, Yakima, Washington from 1961-1962.  Stanley married the love of his life and best friend, Lorraine Kopplin, on March 21, 1970, at Zion Evangelical Lutheran Church in Rib Falls, a marriage lasting nearly 52 years.  Together they raised 4 children on their farm in the town of Hamburg.

Stanley was a hard-working man who was a self-employed dairy farmer for 51 years, until the age of 79 years old.  He farmed alongside his wife for 47 of those years.  In his younger years, he worked for Woller Brothers, and he also worked for Heiser Ready-Mix as a cement truck driver while farming.  He was always willing to help a neighbor whenever they needed.  He was proud of owning a century old farm – an award given to them in 1973.  The family farm has been in the Wiederhoeft family for 149 years with Stanley being the 4th generation to farm alongside his family.  His family always came first.  Stanley was very proud of his children and grandchildren.  He always looked forward to watching his grandsons little league games and their concerts throughout the years.

Stanley loved being outside working in the field with his wife, working in the woods, and cutting firewood with his family.  He liked watching sports – especially the Brewers, Cubs and Packers.  Stanley liked bird and rabbit hunting with his hunting dogs in his younger years and deer hunting with his sons and grandsons.  He loved telling deer hunting stories from years ago about hunting in Newood.  No matter what time of year it was, if there were deer out in his fields, he had the binoculars out to watch them.  Stanley also loved listening to polka music and watching westerns on TV.  During the summer months for the last few years, he would take rides with the UTV around the farm checking out the crops, checking for deer or looking for trees in the woods that needed to be cut for firewood.  Stanley will be sadly missed but never forgotten.

The funeral service for Stanley will be held on Tuesday, March 15, 2022, at 11am at St. John’s Lutheran Church in Hamburg.  The Rev. Donald Love will officiate.  Visitation will be held on Monday, March 14, 2022, from 4pm-7pm at Waid Funeral Home in Merrill, and again at the church on Tuesday, March 15, 2022, from 10am until the time of the service.   Burial and military honors at St. John’s Lutheran Cemetery will immediately follow the service.

Waid Funeral Home and Cremation Service of Merrill is assisting the family with arrangements.  Online condolences are encouraged and may be made at www.waidfuneral.com.

To order memorial trees or send flowers to the family in memory of Stanley Wiederhoeft, please visit our flower store.