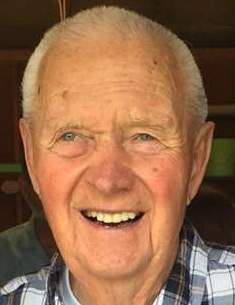 Roman J. Peterson peacefully entered eternal life Friday, June 18 in Merrill. He was reunited with his wife of 68 years, Carol, who preceded him in death in March of 2018.

Roman, who early in life became known as Butch, was born in Park Falls, Wisconsin on January 20, 1930. Butch was one of 5 children raised by Jelmer and Anna (Larson) Peterson. His siblings, brothers: Donald Peterson and Kenneth Peterson, and sisters: Doloras (Boetcher) and Bernice (Garardin), were alongside Carol to welcome Butch to his eternal home.

Butch and Carol (Olson) began their journey together as high school sweethearts, both graduating from Park Falls, Butch one year prior to Carol. Butch attended Wisconsin State College in Superior. He graduated with a Bachelor of Science in 1953. While attending the University, he was an honorary member of the Army Reserve. After college, Butch served for 2 years in the U.S. Air Force. While he enjoyed his service in the Air Force, it wasn’t long before he returned to his hometown and his true love, Carol. They were married in Park Falls in 1953.

Over the next decade, Butch launched into his teaching career, spending time in Butternut and Ashland. Not only was he dedicated to teaching mathematics, Butch also was very involved in coaching. His various teaching positions over the years allowed him to also coach football, track and basketball.

Butch and Carol were also busy building their family. By the time they moved to Merrill in 1968, they were blessed to have added 6 wonderful children to the family. Butch settled in teaching 8th grade math at Merrill Junior High. He is fondly remembered as one of the great all-time teachers by many hundreds of students who passed through his classroom doors over his nearly 40 years teaching.

Friends and family will remember Butch’s love for high school sports. He spent many Fridays and Saturdays “in the booth” for Bluejay football games, and he and Carol never missed the chance to attend basketball tournaments. Their love for football also took them to Madison every fall, where they were season ticket holders for many years.

Butch was also well known for offering his time to the community. He spent 50 years as a Merrill Lions Club Member, where he earned many acknowledgements and service awards. Butch and Carol both could be found every summer working at the Lions Club booth at the Lincoln County fair.

Retirement did not slow Butch down in the least. He filled his “down time” with outdoor activity whenever possible. Hunting and fishing were two of his passions. He continued to camp every summer, mostly at Indian Shores on Lake Tomahawk, where he and his extended family have become fixtures over the years. Butch and Carol were the life of the party wherever they landed. If you were to visit a Caribbean resort to this day and mention you were from Merrill, you would not be surprised to hear “Do you know Butch and Carol”?

Butch is again singing and dancing with those who preceded him in death: his wife Carol, his 4 brothers and sisters, and his grandson Matthew. Butch will be greatly missed by those who survived him, sons: Terry of Merrill, Pat of Minong, WI and Mike of Golden Valley, MN, daughters: Jill (Gustafson) of Minocqua, WI, Barb of Somerset, WI and MaryBeth of Merrill. He is also smiling down on grandchildren: Sarah Frisch of Merrill, Alec Hepp of Green Bay, Ben Peterson of Plymouth, MN and great grandchildren: Avery Frisch, and William Frisch, both of Merrill. Countless other family and friends are remembering and smiling back at him. Cheers, Butch. Thank you for blessing all our lives.

A memorial service and military honors for Butch will be held at a later date.

In lieu of flowers or gifts, please consider a donation in Butch’s name to the Alzheimer’s Association.

To order memorial trees or send flowers to the family in memory of Roman 'Butch' Peterson, please visit our flower store.