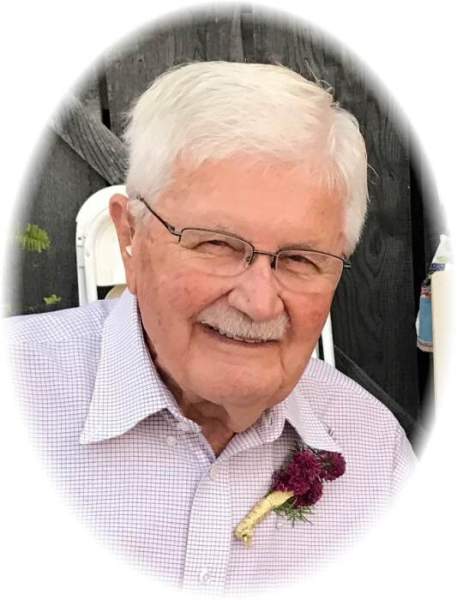 Roger Albert Gutknecht, 95 of Merrill Wisconsin went to be with his Lord and Savior on Jan 2nd 2021. Roger was born June 3rd 1925 in Merrill Wisconsin to Emil and Emma Gutknecht. On October 11th 1947 he married Joan W. Stevenson. They had 3 daughters, Wanda, Linda and Susan. They celebrated their 73rd Anniversary in October. His Dad was a cheese maker and much of his childhood was spent on his Grandmas farm helping the family after his Grandfather passed away. He also worked at the Fromm fox farm in Hamburg, installed telephone poles for his Uncle and worked at the Brokaw paper mill. In 1947 he began a 25 year employment for Wisconsin Public Service where he sold the first electric washing machine in Tomahawk WI.  In 1966 Roger purchased and developed Whispering Pines Mobil Home Park and Sales. In 1988 he began to develop East Gate Condominiums. In 1982 he started Wisconsin Christmas Trees in Fayetteville Arkansas. At the Lincoln County Fair Roger and Joan opened Granny’s Apples along with their grandchildren.  For 12 years he served on the Merrill school board, was a volunteer at the Lincoln boys school where he was a mentor and Bible study leader. He was a member of the Merrill Kiwanis club, the Merrill Historical Society and a member of Gideon’s International for 45 years where he served as state treasurer for several of those years. At Bible Presbyterian Church he served as an Elder, Sunday School Teacher, on the Building Program and many other areas. He and his wife spent time working at Camp Forest Springs and Crescent Lake Bible camp. He was an avid sportsman who enjoyed hunting and fishing in Wisconsin and many other trips to Montana, Alaska, Minnesota and other states along with some trips to Canada. Roger and Joan loved to travel, with trips to Mexico, Israel, Norway and Germany.

Roger was preceded in death by his parents, infant sister Deloris and his wife Joan. Survivors include 3 daughters Wanda (Don) Harris of Merrill Wisconsin, Linda (Steve) Mittelstadt of Marco Island, Florida and Susan (Dennis) Bergthold of Siloam Springs, Arkansas, Seven Grandchildren, Eleven Great Grandchildren and many Nieces and Nephews. A favorite verse of Rogers is Romans 6:23. “The Gift of God is eternal life through Jesus Christ our Lord”. Donations can be made in his memory by going to www.gideons.org  or by picking up a Gideon In Memory Card at Bible Presbyterian or Waid Funeral Home.

Visitation will be at Waid Funeral Home January 15th from11- 2pm with graveside service following.

Please wear masks and social distancing will be practiced at the funeral home.

To order memorial trees or send flowers to the family in memory of Roger Gutknecht, please visit our flower store.