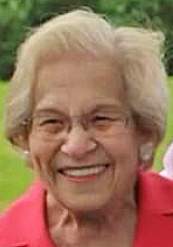 Patricia Jean (Weix) McCarron, age 86, of Merrill, passed away peacefully on Monday, January 31, 2022, surrounded by her loving family.  She was born on May 14, 1935, to the late Emil A. and Kathleen L. (O’Malley) Weix in Medford, WI.  Patricia attended and graduated from Medford High School.

Patricia was employed as the office manager with Stokely USA canning company in Merrill for many years, until her retirement.  Family was a priority in Patricia’s life.  She enjoyed picnics with her family, traveling around the U.S. for family vacations and hosting family holiday gatherings.  Patricia was fond of working on puzzles, playing cards, and reading.  She will be fondly remembered for her sense of humor and contagious laugh.  Patricia was a member at St. Francis Xavier Catholic Church in Merrill.  She will be sadly missed.

Patricia is survived by her children: Mary (David) Riebe of Janesville, WI, Margaret (Billy) Riebe of West Allis, WI, Michael McCarron of Minneapolis, MN, and Barbara Woller of Merrill, 11 grandchildren, 17 great grandchildren, brother: Mark (Betty) Weix, sister-in-law: Sally Weix-Wiley and many nieces and nephews.  She was preceded in death by her parents, Emil A. and Kathleen Weix, her brother: Emil Joe Weix, her sister and brother-in-law: Mary Ann (John) Ritchay and her great grandson: Conner Gregor.

To order memorial trees or send flowers to the family in memory of Patricia McCarron, please visit our flower store.