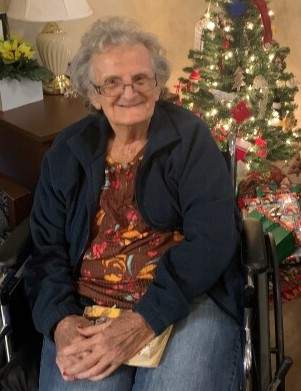 Patricia Ann Garnett, age 86, passed away on February 11, 2022, at Pine Crest Nursing Home in Merrill, Wisconsin. She was born on January 28, 1936, in Manitowoc, Wisconsin to the late Arthur and Velma (Pierce) Neuenfeldt.

On November 11, 1966, Patricia married Oscar William Garnett at the courthouse in Ashtabula, Ohio. Oscar had 6 children, 3 of which are surviving: Wendy, Bonnie and Janice.  He preceded her in death on August 1, 2005. She had been previously married to John W. Creamer, who also preceded her in death in 1999.  John and Patricia had 4 children together: Barbara, Julie, Cynthia, and John.

Back in the day, Patricia loved to crochet, read, and bask in the sun. She especially enjoyed music, the beach, and playing the card game, Pinnacle. She was a huge Bingo fan and loved going out to breakfast with a friend and her sister.

During her lifetime, she faced many hardships, but she never complained. She will be missed dearly by those who knew her.

Patricia is survived by her children: Barbara (Jimmy) Xedos of LA, Julie Gilbert of PA, Cynthia Schmidt of WI, John (Sarah) Creamer of PA, Wendy Huston of PA, Bonnie Garnett of OK, and Janice DiGiacomo of OH, 23 grandchildren, many great grandchildren and 1 great-great grandchild. She is preceded in death by her parents, children: Rose Newman, Danny Garnett, and Linda Noble, son-in-law: Mark Schmidt and siblings Joanne Mushel, and Arthur Neuenfeldt.

A memorial service will be held on Wednesday, February 23, 2022, at 11:00 am at Waid Funeral Home. A visitation will be held from 10:00 am until the time of service also at the funeral home. Inurnment at Merrill Memorial Park Cemetery.

In lieu of flowers donations may be made to Pine Crest Nursing Home in memory of Patricia Garnett.

To order memorial trees or send flowers to the family in memory of Patricia Garnett, please visit our flower store.