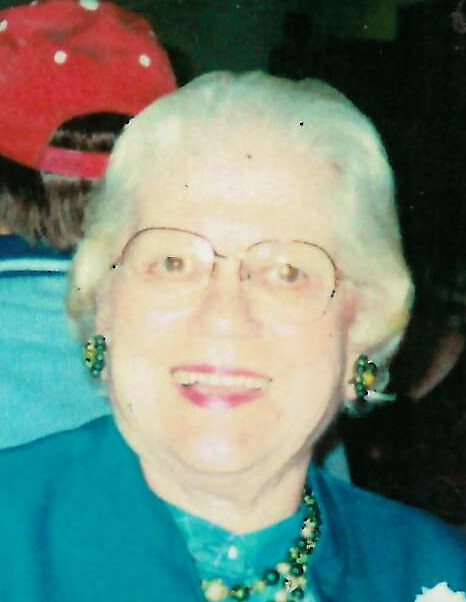 Monica D. Stimers passed away peacefully on Monday, September 4, 2017 at Pine Crest Nursing Home.  Monica was born on March 3, 1925 to Frank and Ida (Tomajcik) Duginski in Merrill.  She attended St. Francis Elementary School and graduated from Holy Cross Catholic High School in 1943.  Monica worked at Woolworth Five and Dine and in the office at Weinbrenner Shoe Company before marrying her long-time sweetheart Robert H. Stimers on October 18, 1947 at St. Francis Catholic Church.  He preceded her in death on December 24, 2006.

Monica and Bob lived their entire life on Riverside Avenue and raised five children.  In addition to being a homemaker, Monica worked at Lincoln Hills Boy School and altered clothes for Thelma’s, as well as doing tailoring for many individuals.  She always enjoyed working in her garden and was a very talented cook and seamstress.

In their retirement years, Bob and Monie traveled the country extensively and took several cruises and a trip to England to see their youngest daughter while she was attending school in Guildford.

Monica is survived by her five children; Bryan (Laurie) of Bailey’s Harbor, WI., Christine Holmes of Oregon, WI., Patrick (Gail) of Sugar Grove, IL., Peggie (Randy) Schmidt of Elk Mound, WI and Roberta Geiselhart of Richfield, MN., eight grandchildren; Andy, Stephanie, Nathan, Brandon, Rhiannon, Benjamin, Jennifer and Jessica, fifteen great grandchildren and another due in October.  She is also survived by one brother; Frank (Jake) Duginski, Merrill, and one sister; Betty Ecklund, Tomahawk, and one sister-in-law; Jean Duginski of Menasha.  She was preceded in death by her parents, her husband, one brother Sam Duginski and two sisters, Veronica Koch and Marion Meyer.

Visitation for Monica will be held on Friday, September 8th 2017 from 10am to 11:30am, with the funeral mass to follow at 11:30am, all at St. Francis Church.  The family wishes to thank the kind and caring staff at Pine Crest Nursing Home who cared for Monica during the past 17 months.

To order memorial trees or send flowers to the family in memory of Monica Stimers, please visit our flower store.