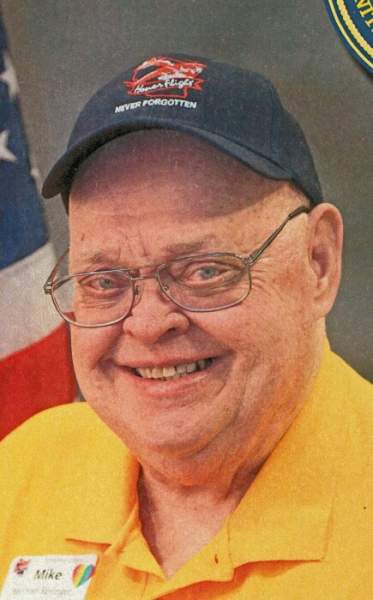 Michael ‘Mike’ Springer, 80, of Merrill, passed away on Monday, August 2, 2021 at Bell Tower Residence in Merrill, while under the care of Aspirus Comfort Care & Hospice Services.  He was born on October 27, 1940 to the late George W. and Eleanor M. (Maki) Springer in Ironwood, Michigan.

Mike was an extremely talented cook and cooked for the Lincoln Hills Boys School for 30 years.  He was also the cook on his Navy ship, the USS Kitty Hawk for 9 ½ years.  He was proud to serve his country in the U.S. Navy, until his honorable discharge in 1970.  Mike was honored to be able to go on the Never Forgotten Honor Flight in 2015.  He enjoyed helping with organizing reunions for the Navy.  Mike was passionate about deer hunting, fishing and going to the range to practice shooting.  He looked forward to his visits to his cottage in Tomahawk.  Mike is remembered as a caring man, with a great sense of humor, always willing to lend a hand and loved his family and grandchildren more than anything!

Mike is survived by his stepdaughters: Deb David of Merrill and Gayle Schulz of Jefferson, WI, son: Rob (Pam) Hofmann of Burnsville, MN, brother: Joel (Laura) Springer of Siren, WI, numerous grandchildren and great grandchildren, along with one step grandchild and 2 step great grandchildren.  He was preceded in death by his, parents, wife, Dolores ‘Lorrie”, brothers: Roy Springer and Robert Springer in infancy.  He was a long-time member at Our Saviour’s Lutheran Church in Merrill.  Mike will be sadly missed, but never forgotten.

The funeral service for Mike will be held on Wednesday, August 11, 2021 at 11am at Waid Funeral Home in Merrill.  Father Jim Horath will officiate.  Visitation will be held on Tuesday, August 10, 2021 from 5pm-8pm at the funeral home and again on Wednesday, August 11, 2021 from 10am until the time of the service at the funeral home.  Burial at the St. Francis Catholic Cemetery will immediately follow the service.  Military honors will be performed at the cemetery by the Merrill V.F.W. Post 1638, along with his grandson, Samuel Toth, who serves in the Air Force Honor Guard.

For those unable to attend, the service will be live streamed and will be available for viewing on Wednesday, August 11, 2021 at 11am, and can be found under his obituary on the funeral home website.

In lieu of flowers, donations may be directed in Mike's name to the Never Forgotten Honor Flight for Veterans fund.

To order memorial trees or send flowers to the family in memory of Michael Springer, please visit our flower store.