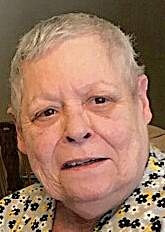 Marilyn Styka, age 72, of Merrill, passed away at her residence on Thursday, November 2, 2017, after a long battle with cancer, while under the care of Asera Care Hospice.  Marilyn was born on February 15, 1945 to the late Edward and Cecelia (Zmudzinski) Farrar in Chicago, IL.  She attended high school in Chicago, IL where she met the love of her life, Paul.  After graduating from high school, Marilyn and Paul were married on May 22, 1965.  Living and working in several areas after their marriage, they settled in Merrill in 1978 and enjoyed many years of snowmobiling.  Their many trips to Hawaii were also a source of enjoyment for them.  Marilyn worked as a deputy Clerk of Courts at the Lincoln County Courthouse for over 20 years and looked forward to her retirement with Paul.  Sadly, he preceded her in death on May 28, 2009.  Throughout the years, Marilyn had many pets, but she especially adored her cats.

Family requests that memorials or monetary donations in Marilyn’s name be directed towards either the Lincoln County Humane Society or the American Cancer Association.

To order memorial trees or send flowers to the family in memory of Marilyn Styka, please visit our flower store.