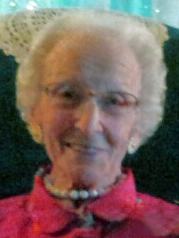 Marie O. Raudwer, age 95, of Merrill, passed away on Thursday, September 7, 2017, at Good Samaritan Hospital in Merrill.  She was born on August 5, 1922 to the late Fred and Vera (Gockman) Grisa in Chicago, IL.  Marie attended and graduated from Merrill High School.  She met and fell in love with William Raudwer, and the two exchanged vows on July 5, 1941 in Gleason, WI  He preceded her in death on October 3, 1988.

Marie had worked as a shoe inspector for many years at Weinbrenner Shoe Factory in Merrill.  She loved music.  Marie enjoyed seeing many Broadway productions in New York.  She was very talented when it came to playing the piano, something she enjoyed and found relaxing.  Marie went on many cruises to many areas of the world, including Bermuda with her son, Bill, Canada, Alaska, Mexican Riviera and the Caribbean.  She was a member at Bible Presbyterian Church in Merrill.

Marie is survived by her son:  Bill Raudwer and brother:  Arthur, with wife Marno Grisa.  Marie is preceded in death by her parents:  Fred and Vera Grisa;  husband:  William Raudwer;  and her brothers:  Edward, Warren and Fred Grisa.

Special thanks to Jon, Christopher & Jonathan Schultz for being the best neighbors anyone could have; Jim & Jenni Schoneman for their continual support and friendship; and, Sue Gunther for her kind care-giving and assistance, and all of the members and friends at Bible Presbyterian Church.

To order memorial trees or send flowers to the family in memory of Marie Raudwer, please visit our flower store.