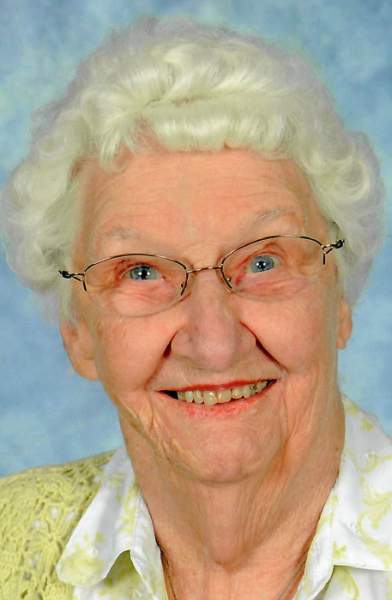 Margie Lillian Johanna Livingston McAlerny, age 93, went to be with her Lord and Savior on Tuesday, November 14, 2017 at Pine Crest Nursing Home in Merrill.  She was born on August 26, 1924 to the late George and Bertha (Monson) Strand in Elmhurst, IL.  Margie attended and graduated from York High School in Elmhurst, IL in 1942.  She met and fell in love with Edward P. Livingston, and the two exchanged vows in Chicago, IL, in 1945.  Sadly, Edward passed away on April 9, 1982.  Margie married Paul McAlerny on September 18, 1987.  He also preceded her in death on January 19, 2009.

Margie worked most of her adult life as a secretary, which she excelled at.  She worked at Automatic Electric, House of Merrill, before retiring from Calvary Bible College.  Margie was excellent with her hands and was an avid shorthand writer, typist and pianist.  She played the piano and organ at the churches that she was associated with.  Margie would also enjoy using her talented hands for hobbies such as sewing and knitting.  She is remembered as being an excellent cook, and would often cook for the family gatherings, always making sure that ice cream was for dessert!  Margie also loved to bake, especially around the holidays.  Family was a priority in her life.  Margie also had a steadfast faith, and she enjoyed reading her Bible on a daily basis.  She taught her children the importance of faith and of family.  She was loved by many and will be sadly missed.

In lieu of flowers, family requests that monetary donations in Margie’s name be directed to the ongoing development of the new wing at Pine Crest Nursing Home or to The Gideons International, P.O. Box 140800, Nashville, TN 37214-0800.

Waid Funeral Home & Cremation Service of Merrill is assisting the family with the arrangements.  Online condolences may be made at www.waidfuneral.com

To order memorial trees or send flowers to the family in memory of Margie McAlerny, please visit our flower store.