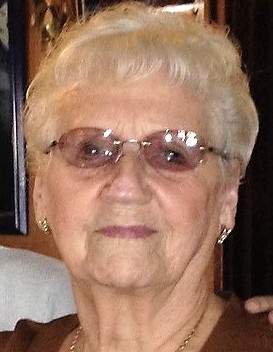 On Saturday, September 4, 2021, the angels came for Margaret M. Hermanson, as she entered eternal rest while in her daughters’ arms, at the age of 94 years old.  Margaret was born to the late Hugh and Sarah Ritchie in Belfast N. Ireland on February 9, 1927.

“God called your name so softly, that only you could hear; and no one heard the footsteps,

Of angels drawing near.  The golden gates stood open,

God saw you needed rest; His garden must be beautiful,

He only takes the best.”

Our mother had seen and experienced so much in her 94 years.  Her fond childhood memories were filled with the simple life to hardships in bomb shelters.  She later met her future husband, Sherman, in Belfast while on furlough.  They married in 1944. He left for Normandy WWII, and they were finally reunited March 1946.  She sailed on the Henry Gibbons as one of the many war brides.  She docked in New York, then took the train to Wisconsin.  She was so courageous to leave her home, family, and city life to begin a new home, family, and farm life.  Mom was homesick for a long time but grew to love the country life.  They had 6 children and lived in Wisconsin until 1976, when they moved to Alaska.  She resided there until 2017, when she moved to Wisconsin to be with family.

Our mother was the sweetest, most generous lady.  Her faith, kindness to others and always dressing and acting like a lady was a priority.

She traveled back to Ireland 45 years later to see her family. She traveled all over the United States and hiked the Diamond Head in Hawaii with her daughters at age 70.  She was willing to try and do everything.  She worked many professions, but her favorite was floral arranging.  Her hobbies were many, including knitting, crocheting, crafts and decorating.

Mom – you’ve lived a long life full of hardships, adventures and experienced more than we can imagine.  We are in awe of your bravery.  You will be missed dearly.  You were a devoted wife, mother, grandmother, and friend to many.  You never knew a stranger.  It’s been our honor to have you for our mother.  We’ll cherish the memories we’ve shared, relive the stories of your full, love-filled life, endlessly.

A family celebration of Margaret’s life will be held at a later date.

To order memorial trees or send flowers to the family in memory of Margaret Hermanson, please visit our flower store.