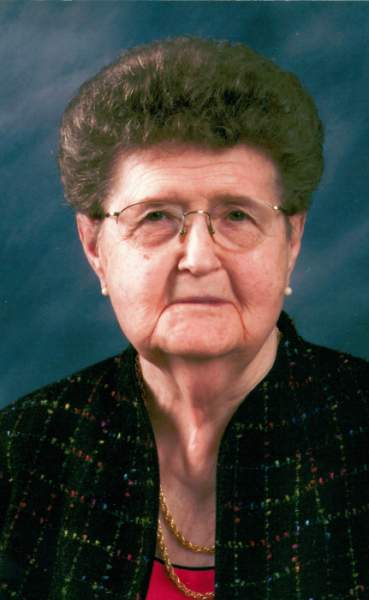 Leona T. Schmidt, age 91, of Merrill, died on Friday, August 10, 2018 at Pine Crest Nursing Home in Merrill, while surrounded by her family, and under the care of Ministry Hospice.  She was born on October 1, 1926 to the late Edward and Ida (Jahns) Rusch in the town of Maine.  Leona attended grade school in the town of Pine River.  She met Alfred Schmidt, and they exchanged marriage vows on June 15, 1946 in the town of Pine River.  He preceded her in death on October 18, 1984.

Leona was a farm wife, a loving mother and a homemaker.  She enjoyed polka dancing and traveling around the United States.  Leona was in the Homemakers Club, 4-H, the Farm Bureau, and enjoyed volunteering at Pine Crest Nursing Home and the Grey Ladies.  Leona had a talent for knitting and crocheting, as well as manicuring her flower gardens at home.  She especially loved watching the hummingbirds.   She cherished her time spent with her grandchildren, great grandchildren and great great grandchildren.  Leona was a member at St. John Lutheran Church in Merrill, and was involved with the ladies aid, choir, alter guild and helped with the fair stand and Bethesda.  She was a down to earth woman that had a gentle soul, and will be missed.

Funeral Services for Leona will be held on Friday, August 17, 2018 at 11am at St. John Lutheran Church in Merrill.  The Rev. David Szeto will officiate.  Visitation will be held on Friday, August 17, 2018 from 9:30am until the time of the service, also at the church.  Burial will be at St. Paul’s Lutheran Cemetery in the town of Scott, immediately following the service.

To order memorial trees or send flowers to the family in memory of Leona Schmidt, please visit our flower store.