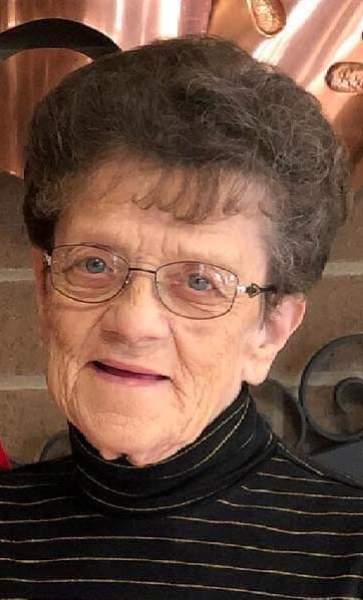 Kathleen ‘Sparky’ Mae Graap, age 74, of Merrill, passed away on Friday, September 17, 2021, at her residence, while surrounded by her loving family and while under the care of Interim Hospice.  She was born on February 9, 1947, to the late Hugo and Evelyn (Nienow) Schleif in Merrill.  Kathleen attended and graduated from Merrill High School, and then went to work for Weinbrenner Shoe Company in Merrill.  She married the love of her life, Dennis ‘Boomer’ Graap on July 2, 1966, in Merrill.  Sadly, he preceded her in death on May 26, 1997.

When Kathleen was younger, her and Boomer would be active in bowling leagues and the Eagles Club.  Kathleen retired from Weinbrenner in 2019, after over 50 years of service!  She was also a cashier at the Eagles Club part-time and did that for 27 years.  Kathleen was very active in the Eagles Club and would help with all their benefits.  She looked forward to playing cards with her friends at Jenny Towers, as well as going to the casino playing slot machines, cards, and bingo.  Kathleen was a feisty, fun lady that was always up for a good time.  Above all, her love for her family was like no other, especially for her beloved grandson, Connor.  She looked forward to going to all his events and activities, and even taking a few trips to Disney World and New York.  Kathleen was a member at St. Stephen’s United Church of Christ in Merrill and was a member of the Eagles Auxiliary for over 45 years.  She fought hard until the end.  Kathleen will be missed by all who knew and loved her, but never forgotten.

A funeral service for Kathleen will be held on Wednesday, September 22, 2021, at 11am at St. Stephen’s United Church of Christ in Merrill.  Pastor Mike Southcombe will officiate.  Visitation will be held on Tuesday, September 21, 2021, from 4pm-7pm at Waid Funeral Home, with an Eagles Auxiliary Service at 6pm, and visitation again on Wednesday, September 22, 2021, from 9am until the time of the service, at the church.  Burial at Merrill Memorial Park Cemetery will immediately follow the service.

Kathleen’s family would like to express their thanks and appreciation to Interim Hospice for taking such good care of her during her last days, especially Roseann Keen and Rachele Greenwood.

To order memorial trees or send flowers to the family in memory of Kathleen 'Sparky' Graap, please visit our flower store.