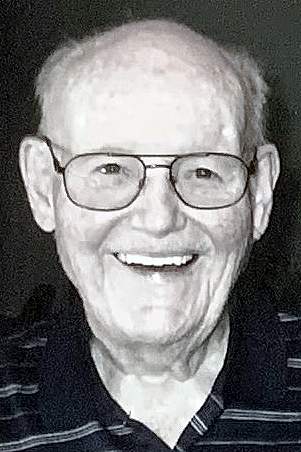 John ‘Jack’ Timothy Crowley, 90, of Merrill, died on Wednesday, March 17, 2021, at Ascension Good Samaritan Hospital in Merrill. He was accompanied by his family when he passed.
Jack was born on May 19, 1930 to Dr. William T. and Grace M. (Doran) Crowley in Milwaukee, WI. Jack graduated from Pius Xl High School in Milwaukee and went on to further his education at Marquette University. Jack also served in the U.S. Marine Corps during the Korean War. In 1956, Jack married Joyce Beatty and together raised six children until her untimely death in 1966. He then met and married the woman Jack would later say saved his life, Delores Alaspa. With her two children, plus one of their own, Jack and Dee created their version of Yours, Mine & Ours.

Jack’s career began in radio in the 1950’s and transitioned into television broadcasting until his retirement. He was Vice President of Productions, Promotion and Programming at WSAW - TV and claimed to have never worked a day in his life. Jack also served his community in many ways over the years. Some of his accomplishments included: serving on the Wausau School Board, the United Way, the Wausau Chamber of Commerce and the Wisconsin State Council of Tourism. After retirement, Jack was a Foster Grandparent at Lincoln Hills and Copper Lake School. One of Jack’s fondest memories was attending the Never Forgotten Honor Flight for Veterans on September 11, 2017.  A lifelong music lover, Jack’s musical tastes ranged from Big Band to Frank Zappa. As a young man, Jack and his brother Bill spent four summers performing with the Grand Canyon North Rim House Band. Jack was passionate about the Green Bay Packers, reading a good book, playing golf, fishing (not catching) and spending time at the family cottage on Bird Lake. He enjoyed hearing and telling a good joke over a Miller Lite at his favorite watering holes.

Jack is survived by his wife of 55 years, Delores ‘Dee’ Crowley of Merrill, his nine children: Kevin, Lisa, Shawn, Brian, Paul, Michael, Megan, Erin and Bill, their families, ten grandchildren, one great granddaughter and many nieces, nephews and friends. He was preceded in death by his parents, two siblings and one infant great granddaughter.

We feel Jack’s departure date on St.Patrick’s Day was no coincidence. Family and friends will forever be raising a glass to him on this special day remembering the way he loved and celebrated life.

No one loved life more than Jack Crowley.

We know he wouldn't want us to wallow in our sadness.

Please join us as we gather to celebrate life, toast our memories and raise a glass to Jack.

In lieu of flowers, family requests that donations in Jack’s name be directed to either the Lincoln County Humane Society or the Lincoln County Library. The family wishes to give a special thank you to Compassus Hospice Care and the Ascension Good Samaritan Hospital for their care and compassion shown to Jack and his family.

Waid Funeral Home & Cremation Service is assisting the family with arrangements. Online condolences are encouraged and may be made at www.waidfuneral.com

To order memorial trees or send flowers to the family in memory of John 'Jack' Crowley, please visit our flower store.