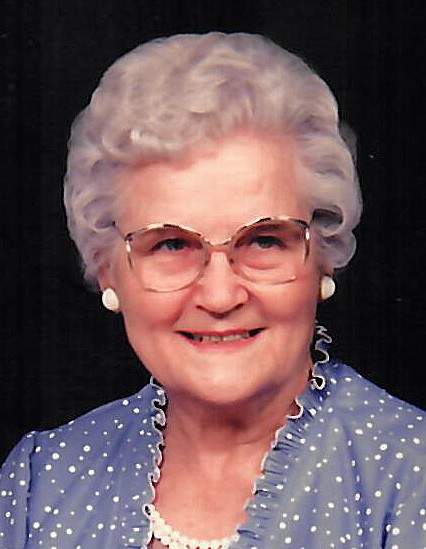 Helen Esther Mosser, nee Zastrow, age 103, of Merrill, entered eternal life on Wednesday, March 20, 2019 at the Ascension Good Samaritan Hospital in Merrill.  She was born on September 14, 1915 to the late Emil and Augusta (Raatz) Zastrow in Merrill.  Helen attended school at Pine River until the 8th grade.  She met and fell in love with the love of her life, Stanley Mosser, and the two exchanged marriage vows on May 25, 1940.  He preceded her in death in 1988.  Together, they raised 3 children, Gary, Judy and Carol.

Helen had worked at Wollen Mills, Hanson Glove, Merrill Candy and Fox Point.  She was a seamstress as an occupation, but also as a passion.  Helen was very talented when it came to crocheting, patchwork, sewing or making alterations.  She was also involved with a quilting group at her church.  Helen lovingly made all of her grandchildren afghan and quilts for their weddings. She enjoyed reading and doing puzzles later in her life, as well as playing many games of Farkle.  Helen was also an excellent cook and baker, making the best pies, bread and her famous dumpling dinner.  She looked forward to family meals together and gatherings.  Helen liked to watch the birds, especially the cardinals that would frequent her home.  She is remembered as a content and kind woman that always had a smile on her face!  Helen had a very strong faith, and it was a very big part of her life.  She was a member of Luther Memorial Church in Gleason.

In lieu of flowers, family requests that you give a donation in Helen’s name to either Luther Memorial Church or the T.B. Scott Library.

To order memorial trees or send flowers to the family in memory of Helen Mosser, please visit our flower store.