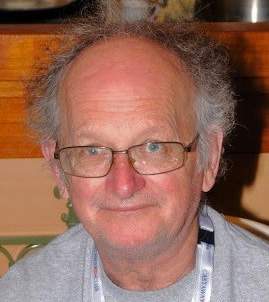 Gary A. Rajek, age 67, passed away unexpectedly but peacefully in his sleep on Thursday, January 17, 2019 at his residence in Merrill.  His family takes great comfort in the peace of his passing, with a full day of life having been lived, and a new opportunity to join those who have gone before him.  We will all meet again!

Gary was born May 9, 1951 to the late Robert and Genevieve (Ravey) Rajek in Merrill.  He spent his youth gallivanting around Merrill’s 6th ward with friends and family like Bobby Koepke, the Hinner boys, and Dickie Schotz; netting minnows for Nanny in Devil’s Creek (and every creek within a 100-mile radius) and testing his skills in the early years of the Merrill Ice Draggers.  Gary attended Merrill High School graduating with the Class of 1970 and furthered his formal education in the Machine Tool and Die program at Northcentral Technical College in Wausau.  In the late 60’s, after being a friend of the family for many years, Karen Hinner finally gave Gary the chance of a lifetime–the opportunity to bring her to a party in his white Ford car.  On the way home, she turned that passenger-side paint from white to purple streaks, and he knew it was meant to be.  The two exchanged wedding vows in Merrill on February 8, 1975.  She survives.

Gary was a member of the executive leadership team for Merrill Iron & Steel for many years.  He worked in nearly every facet of the business, with his most recent formal title being Director of Transportation.  He was the type of leader that found deep value from the input of others–always listening and open to ideas that were different from his own.  He leaned into his own expertise, not to further his “way”, but instead used it as a fail-safe when enabling approaches brought forward by others.

Special mention to a few of Gary’s deal making friends include Virgil Kufahl who knew where to find all types of machinery or equipment at the right price and Tommy and his late father, Lenny Salzman spending many years doing special “favors” for one another.

He was a skilled cook, grill-master and master meat smoker.  He was a mechanical genius, rarely encountering a motor he could not fix, a problem he could not solve, or a pot he could not stir.  He took pride in his gardening, both flower and vegetable, and enjoyed building greenhouses, watering schemes, and harvest methods to keep his penchant for invention satisfied.  Gary was also an avid pool player, joining leagues and competitions, playing most recently for his long-time friends, Tom and Bev Godleske, and following their retirement, Outboard.

Gary was a collector of many things, getting most excited by dumpsters and “curbside markets” with cardboard signs reading “Free” or better yet, “Free–it works!”  He was also a grandmaster deal maker, buying and selling projects and parts through smooth talk, a handshake, and a six-pack.  His collection includes cars, lawnmowers, grills and countless trinkets that he didn’t even know he needed.  He enjoyed tinkering with the treasures that he would find and passed his knowledge of all things mechanical to his sons and grandsons whenever he could.

His family was first and foremost in his life, and he treasured his time spent with them.  In particular, he loved spending time with them in the great outdoors.  Despite taking trips, big and small, north or west, to hunt for game like elk and deer, Gary preferred to watch others take the shot.  For him, it was all about the opportunity to be experiencing those moments with those he loved most.  This was true of his joy in fishing as well.  No matter where he went—a Lake Michigan charter boat, his “secret spot,” in the S.S. Minnow, or out of his truck window on the ice—Gary lived for the moment always enjoying watching others land a “big one.”

Pops was constantly looking for new and crazy ways to bond with his kids and grandkids–from tapping trees for the sugar shack and a honey bee hobby, to roller coasters and jet boats, he was happiest when laughing alongside his wife, kids and grandkids.  Gary’s ready laughter and quick wit will be cherished by his family and all who knew him.

Gary was remarkable in his natural ability put others at ease; his incredible capacity for teaching–often laughing through mistakes and leading by encouraging others to never be afraid to fail.  His family and friends will remember how he was always there with a helping hand and will deeply miss him.

In lieu of flowers, memorials may be directed to the family for a special memorial being made in honor of Gary.

To order memorial trees or send flowers to the family in memory of Gary Rajek, please visit our flower store.