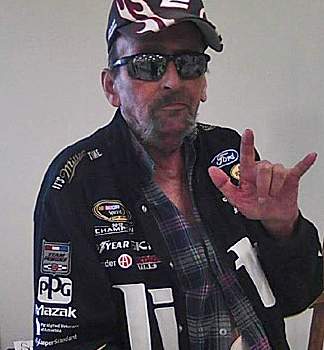 Gary Gene Weber or “Web” as he was known by most everyone, age 67, of Merrill, passed away peacefully Saturday, May 19 2018, at his home, surrounded by his wife, Nadine, his son, Cody and his daughter-in-law, Shannon, along with Aspirus Comfort Care & Hospice Services.  His daughter, Callie, and grandson, Wyatt were not physically at his side, but their hearts were very much with him.  Gary entered this world on September 16, 1950 to Earl and Selma Weber in Merrill, he was their first born son.  Selma survives.  Gary attended and graduated from Merrill High School and worked on grandma and grandpa Schuster’s farm and the Associated Co-op.  Gary married Nadine Roberts on July 9, 1977 in Tomahawk, WI.  She survives.   They had two children, Callie (Daniel) Boneck and Cody (Shannon) Weber, and his grandson, Wyatt, who was his pride and joy.

Gary proudly served his country in the Army National Guard, starting in 1969, and continued to serve for the next 7 years and was honorably discharged.  He was very active with Motorsports and enjoyed competing in demolition derby’s throughout central Wisconsin.  Gary was also an active member of the Merrill Ice Drags for many years, with his numerous Chevy’s throughout the years.  Gary was also an avid pool league player for much of his life.  He enjoyed talking with his buddies and drinking Old Style at the tavern.  He wanted his friends at S&S to know he truly enjoyed their company.  Gary did not have much of a serious side and that was evident throughout much of his life.  He was a kind-hearted and giving man, who would give anyone the shirt off his back if he knew that it was needed.  Gary was a simple man who didn’t expect anything from anyone.  Except for the Green Bay Packers and Rusty Wallace, then Brad Keselowski to win!  Gary was employed by Anderson Brothers & Johnson red granite quarry company, and then Merrill Equipment, until his retirement.  He is remembered as a very hard-working man .  This last January, Gary and Cody went to Charlotte, NC to visit the NASCAR Hall of Fame and he met his driver, Brad Keselowski, a trip that they both cherished.

Gary is survived by his mother:  Selma Weber of Merrill, his wife: Nadine Weber of Merrill, daughter: Callie (Daniel) Boneck of Oregon, son: Cody (Shannon) Weber of Merrill, grandson: Wyatt Weber, sisters: Nancy (Ken) Raddatz, Susan (Terry) Marth and Terry (Duwaine) Weber-Nahring, all of Merrill, brother: Dennis (Jocelyn) Weber of Merrill and numerous nieces and nephews.  He is preceded in death by his father: Earl Weber.  In lieu of flowers, family requests that donations in Gary’s name be directed to “Jessi’s Wish”.

A Funeral Service for Gary will be held on Thursday, May 24, 2018 at 7:15pm at Waid Funeral Home in Merrill.  The Rev. Scott Gustafson will officiate. Visitation will be held on Thursday, May 24, 2018 from 4pm until the time of the service, also at the funeral home.  Military honors will be performed by the local V.F.W. Post #1638 immediately following the service at the funeral home.

“Bye. Love you, mush.  Thanks everyone for the good times, I wish you all luck and take care!  I encourage everyone to get a colonoscopy when appropriate.” ~Gary

To order memorial trees or send flowers to the family in memory of Gary Weber, please visit our flower store.