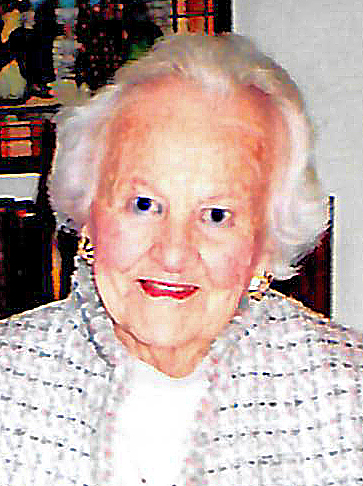 Dorothy (Dottie) Lillian McDermid Heggblom, age 103, of Scottsdale, AZ, passed away on Monday, September 25, 2017, at her residence in Scottsdale, AZ.  She was born on December 29, 1913 in Chicago, IL, the youngest of three children of Ralph McDermid & Lillian Elvira Manewal  McDermid.  Dorothy’s parents’ families had emigrated from England, Scotland and Germany, and had deep roots in America.  Fairbanks House, in Dedham, MA was built by her ancestor in 1637. The timber-frame house remains open today as a museum.  Dorothy grew up just north of Chicago in Glencoe, IL.  After high school, she attended the University of Wisconsin, transferred to Northwestern University, joined the Alpha Chi Omega sorority, and graduated.  During one geology class in Madison, she met Conrad (Connie) Heggblom of Merrill, WI and the rest is history!

Dottie and Connie were married on July 17, 1937 in Glencoe, IL and honeymooned in Merrill.  For the next thirty years, Connie’s work with Gulf Oil Corporation took them to Mississippi, California, The Bahamas, Mozambique, Libya and Denmark.  Dottie was an excellent corporate wife, willing to travel the world and create a warm family home wherever the company would send her husband.  She demonstrated that willingness as early as 1948, when Connie was transferred from Nassau, Bahamas to Lourenco Marques, Mozambique.  With an eight year old, a five year old and an infant, Dottie and Connie spent four weeks on The Robin Gray, a twelve passenger freighter, which took them from New York City to Capetown, South Africa.  Dottie and the children continued on to Lourenco Marques without Connie, who had gone ahead to Mozambique on business.

Throughout her life, Dottie enjoyed good health, playing bridge, golfing, studying history and traveling.  She and Connie enjoyed his membership in The Circumnavigators, a club whose members all have circled the globe.  In retirement, Dottie & Connie divided their time between Scottsdale, AZ and Merrill, WI, where in 1972, they replaced the fifty year old cottage on Lake Pesobic with a Wausau home.

A private graveside service for Dorothy will be held at Merrill Memorial Park Cemetery in Merrill.  Waid Funeral Home & Cremation Service of Merrill is assisting the family with arrangements.  Online condolences may be made at www.waidfuneral.com.

Memorials in memory of Dorothy may be directed to the Merrill Historical Society, 100 E. 3rd Street, Merrill, WI, 54452.

To order memorial trees or send flowers to the family in memory of Dorothy Heggblom, please visit our flower store.