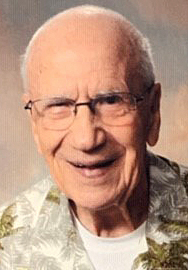 Donald H. Radke “Hon”, age 95, of Merrill, passed away on Sunday, August 2, 2020 at the Wisconsin Veteran’s Home in King, WI.  Donald was born on November 28, 1924 in Merrill, son of the late William F. and Adline (Klevine) Radke.  Don proudly served in the United States Navy and was a WWII Veteran. Donald married Bernice Klemp on August 15, 1949 in Bessmer, MI.  She preceded him in death in 2004.

He was the owner of “Hons” Bar in the sixth ward.  His life work was working construction and being a custodian for Merrill schools.  In the later years, he was a security guard for Weinbrenner’s in Merrill.

Don had the chance to go on the Veterans Honor Flight on April 27, 2015, something that had meant a lot to him. He enjoyed carpenter/remodeling work, loved his Irish Setters, being a Packer fan and spending time with his family.

A private family service will take place at the Merrill Memorial Park Mausoleum on Monday, August 10, 2020 at 10am.  Full military honors will be performed by the Merrill VFW Post # 1638.

Family wishes for memorials in Don’s name be directed to the family for a memorial bench.

To order memorial trees or send flowers to the family in memory of Donald Radke, please visit our flower store.