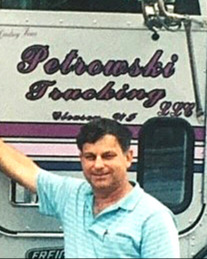 Donald ‘Don’ R. Petrowski, age 77, of Merrill, passed away on Thursday, December 1, 2022, while being cared for at Homme Home in Wittenberg.  He was also under the care of Compassus Hospice.  Don was born on April 14, 1945, to the late Alex and Emma (Janda) Petrowski in the town of Vilas, Langlade County.  He grew up and attended school in the town of Vilas. In 1965, Don found the love of his life, Donna Yonke, and the two exchanged marriage vows on July 10, 1965, at St. John Lutheran Church in Merrill. They enjoyed many polka dances together over the years, Don loved his polkas!  Sadly, Donna passed away on November 13, 2007.

Don drove truck for many years, and truly loved his job!  He worked for several companies, including Prinzel for 7 years and Hanz Construction for 13 years.  Later in life, Don owned and operated Petrowski Trucking. He always said, “If you have a CDL, you will always have a job”.  When he wasn’t trucking, he looked forward to going to Darin’s cabin during the Fall and deer season.  Don attended the Eagle River Snowmobile Races every year, for many years, something he always was excited to do.  He was a sociable and friendly person that liked to be with his friends and family, just having a beer and talking.  He is remembered as a pleasant man, not only by his family, but by his caregivers as well.  Don loved and cherished his time spent with his grandchildren and great granddaughter. He will be sadly missed by his friends and family.

Funeral Services for Don will be held on Tuesday, December 6, 2022, at 11am at Waid Funeral Home, with a visitation starting at 9am, also at the funeral home.  Pastor Greg Laska will officiate.  Interment at Forest View Cemetery in the town of Vilas will immediately follow the service.

Family would like to thank all of those that were involved with his care.  The care and support shown to Don and his family is appreciated beyond words.

Waid Funeral Home & Cremation Service in Merrill is assisting the family with arrangements.  Online condolences are encouraged and may be made at www.waidfuneral.com.

To order memorial trees or send flowers to the family in memory of Donald 'Don' R. Petrowski, please visit our flower store.