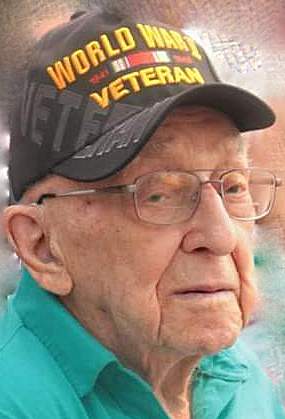 Clifford ‘Cliff’ Oscar Maluegge, age 95, passed away on Sunday, October 24, 2021, at Bell Tower Residence in Merrill, while under the care of Aspirus Comfort Care & Hospice Services.  He was born on January 23, 1926, to the late Harry H. and Esther (Degner) Maluegge in Merrill.  Cliff proudly and bravely served in the U.S. Army during WWII, from May 8, 1944, until his honorable discharge on May 12, 1946. For his service to the country, he was awarded the Purple Heart and the Good Conduct Medal.  Cliff then met the love of his life, Ruth Arlene Lohff, and the two lovingly exchanged marriage vows on June 26, 1948, in Merrill.  Sadly, Ruth passed away on June 21, 2017, after a union of nearly 69 years.

Cliff worked as a laborer for various construction companies, primarily Wergin.  He would be the worker that everyone could depend on and liked to see his projects go from start to finish, he was truly a “jack of all trades”.  After retirement, Cliff enjoyed woodworking and would make his family all sorts of wooden pieces for their homes.  He also took up caning chairs and helped his kids when it came time for them to build their own homes.  In his spare time, Cliff enjoyed being outdoors, whether it was trout fishing, deer hunting or tending to his vegetable garden.  He was a great cook and baker and taught his children to make some of his specialties.  He is best known for his Chocolate Crinkles and Trilbies.  Cliff was honored that he was able to attend the Dream Flight, just this past August 3, 2021, and The Never Forgotten Honor Flight for Veterans on April 17, 2011.  Above all, Cliff loved his family.  He adored his grandchildren and great grandchildren, and they followed grandpa everywhere as his little ducklings!  Cliff was a member of the Trinity Lutheran Church in Merrill, the Men’s Club at Trinity, the V.F.W. Post #1638, the DAV and the Central Wisconsin Polka Club.  Cliff had a heart of gold and will be sadly missed by all who had the pleasure of knowing him.

The funeral service for Cliff will be held on Monday, November 1, 2021, at 11am at Trinity Lutheran Church in Merrill.  Reverend Scott Gustafson will officiate.  Visitation will be held on Sunday, October 31, 2021, from 4pm-8pm at Waid Funeral Home and again on Monday, November 1, 2021, from 10am until the time of the service, at the church.  Burial will immediately follow the service and take place at Merrill Memorial Park Cemetery, with military honors conducted by the Merrill V.F.W. Post #1638.

The service will be live streamed for those unable to attend, and will be available for viewing on November 1, 2021, at 11am, and can be found under his obituary on the funeral home website.  It will then be posted as a recording for future viewing.

The family would like to thank the staff at Bell Tower Residence for the wonderful care provided to Cliff over the last 4 years.

Donations in Cliff’s name may be directed to Trinity Lutheran School or the Bell Tower Residence activity fund.

To order memorial trees or send flowers to the family in memory of Clifford 'Cliff' Maluegge, please visit our flower store.