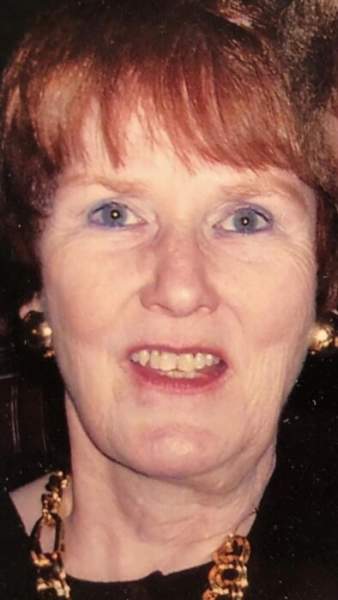 Helene, also known as Mom, Grandma, Aunt, at age 80, used her one way ticket to Heaven, on November 13, 2020. She left us very suddenly, and peacefully, at her family’s home in Merrill Wisconsin, with her daughter by her side.

Helene was born on October 12, 1940, in Chicago, IL, to John “Jack” and Bridget (Duffy) Fahy. She graduated from Resurrection Catholic Grade School, Old St Pat’s Catholic High School for girls, and Wright Junior College, where she earned one year of business credits.

In her teen years, Helene worked at Petersen’s Ice Cream Parlor, on the west side of Chicago. She soon met John “Leo” Curtin at a local dance. Her and Leo went from dating to marriage, on November 30, 1957, at Resurrection Catholic Church in Chicago. They also went all the way to the other side of Chicago for their honeymoon.

Helene met Norman Vedner in approximately 2003 and eventually they were married. They bought their home in Park Ridge, where they lived until Norm’s death about 2 1/2 years later. Helene lived in their home until October of 2019, when she moved to Wisconsin to live with her daughter and family.

Throughout Helene’s earlier child-rearing years, she was stay at home Mom, with the exception of having worked one year outside the home, for Callerman and Company. That job helped pay for the addition on their home.

While their children were in school, Helene was a regular hot dog lunch Mom, a school sports and cheerleading games driver, and a Great Books Mom helper for Monday evening sessions.

Helene was a very loyal, long term member, at St. Thecla Catholic Church, for over 50 years. Some of her involvement included being the church’s Ministry of Care Director for a number of years. Helene was very devoted to that role and to the parishioners she and the ministry served. She truly loved her parish and her parish family, but was most passionate about her faith in God and in prayer, which she always relied strongly on for getting her and her family through the many trials in their lives.

Helene loved cheering on (quite loudly) the Chicago Cubs, and also watched the Chicago Bears (not quite so loudly), the WGN News and Weather, HGTV, and Wheel of Fortune, which she thoroughly enjoyed watching with her grandson.

Helene appreciated looking through family pictures, reading self-help books, praying daily for everyone on her prayer list, reading daily devotionals, working on crossword puzzles (Leo would kiddingly do them first in red ink because he was so sure of his answers), and many moons ago when they bowled on a couple’s league with her sister, brother-in-law, and many close friends.

Helene, Leo, and the kids went on annual summer family driving vacations, whether it was to Wisconsin, Indiana, Missouri, Arkansas, Michigan, Tennessee, Kentucky, Ohio, etc, while always anticipating Leo taking his “shortcuts”, ultimately getting them lost and adding hours to their trips. They were also able to have many more wonderful travel experiences several years later, when Beth Anne worked for the airlines. Helene and Leo took full advantage of all of their free flights to visit family in California, as well as to vacation in Maine, Massachusetts, Florida, along with other destinations, including many visits to family in England and Ireland. Her last big trip was several years ago, when she went on an Alaskan cruise.

Helene’s most treasured pastime was time spent with her children and grandchildren, doing puzzles, coloring, watching Sesame Street and Barney the Dinosaur, lying on the floor playing matchbox cars, or spending countless 5:30 am mornings singing and dancing to “Achy Breaky Heart”. After those tiring younger kid years passed, Grandma would make endless trips with Grandpa, or Michael, to Wisconsin, to go to music recitals, attend special celebrations, birthdays, and graduations, or just go see the grandkids there (oh, and their parents, too).

Helene’s grandsons had these things to say about their Grandma:

“Grandma was genuine, selfless, and kind. Whether it was by actions or words, she made it apparent how important her family and friends were to her. She was greatly loved and will be greatly missed.”

“Grandma was someone who always brought and kept the whole family together. She loved everyone equally and unconditionally, and we will miss her so much.”

“Always will remember her smile and honesty. No matter how busy she was, she would always take the time to check in on us. She always put others first before herself, and was so compassionate and caring towards everyone around her. She will always be my Granny.”

To sum up Helene’s life and legacy, she consistently gave her love and her heart to all! For one, she called Beth Anne and her grandkids every single Monday for over 20 years. That’s how she stayed so connected, just so that everyone could say how much they loved each other. That is a legacy like no other! There is no doubt how much she loved her family...and how much her family loves her. She left her heart print for always because of what she did and who she was to her family and to so many others. There is already such a massive void in her family’s hearts, that will one day be filled with all of those wonderful memories and love. Those were the gifts she left behind for all of us. She will be so very loved and missed forever.

Helene was the most treasured, loving Mother to Michael, Beth Anne (Paul, who always teased that Helene loved him more than Beth Anne), and Kathleen (Jimmy, who was the greatest ever Mother-In-Law, brown-nosing opponent to Paul). Adored Grandma to Kyle, Collin (girlfriend Stephanie), Matthew (girlfriend Mariah), and Michael “Mikey” (Isthar), Nicole (Ben), beloved Great-Grandmother of Rainey and Savannah, treasured sister to Tom (Jerry), Jack (Rosemary), Virginia, Pat (Bill), Mary Ellen (Gene), Irene, and Pauline (nee Vedner). Special Aunt to 31 plus very loved nieces and nephews, some 60 plus great nieces and nephews, and a dear friend to so many.

Extreme gratitude to all the family and friends who’ve been there for Helene, Beth Anne, and family throughout their family’s three monumental losses within such a short period of time. Much thanks also goes to the wonderful Interim Hospice Team, specifically and hugely Roseann Keen RN, also Nancy Dionne RN, Carissa Cuchosz NP, Chaplain Joy Nelson, and Social Worker Tim Moe, all of whom were so caring and supportive of Helene and her family through this very difficult time

Due to COVID concerns, a private family service was held in the Chicago area. There will also be a special, memorial celebration planned at a later date.

Waid Funeral Home, in Merrill Wisconsin, is helping with all arrangements. Family and friends can sign Waid’s online guestbook, as well as can click on “share a memory” to support the family at this difficult time.​

To order memorial trees or send flowers to the family in memory of CATHERINE “HELENE” (CURTIN) VEDNER, please visit our flower store.