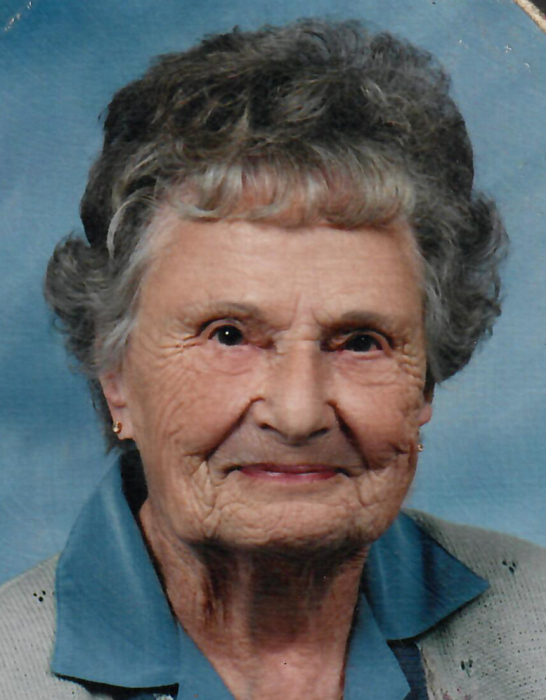 Alice M (Gatterman) Alberg , 101, of Merrill WI passed away November 1, 2020 at Bell Tower  Residence.  She was surrounded by her loving family at the time of her death.

Alice was born December 11, 1918; daughter of William and Cecelia (Templin) Gatterman.  She was born during the Spanish Flu Pandemic; it nearly took her mother when she was pregnant with her.  She was Baptized at St Francis Xavier church, and has been a life time member of the parish receiving First Holy Communion, Confirmation, and later being married there.

She attended Jefferson School K-3rd grade when her parents decided she was old enough to walk the cold windy bridges to attend St. Francis Xavier School 4th – 8th Grade.   After 8th Grade she attended Merrill High School which she attended until her graduation in 1936.

On November 15th. 1941. Alice Married her childhood sweetheart Melvin E Alberg.  They were blessed with their only child, daughter Barbara Jean November 7th, 1942.  They bought a lot, one house down from her parents, and built a house that they moved into in 1949.  She lived on the same street, same block, the same side of the street for her entire life until she suffered a fall in February of 2020. That is 101 years.  This was very convenient as she took care of both parents as their health failed until their death.  She was always caring for others.

When Barbara decided that she was going to go to College, she got a job working for Taylor Insulation Company.  This job was just supposed to cover a maternity leave.  Her employment lasted until her retirement in 1983.

Alice had many hobbies.  She enjoyed flowers and gardening.  She water skied into her late 60’s, saying that she loved the feel of the water under her feet.  She wrote many articles about Merrill childhood that were published in The Merrill Courier.  The articles were about her memories of Merrill, as her memory was sharp until her isolation due to the Corona Virus pandemic.  She was a voracious reader sometimes reading a book a week.

The church was an important part of her life.  She started attending Mass at Bell Tower when her sister became a resident there.  Over the years she has established meaningful relationships with many of the Sisters of the Holy Cross.

She was preceded in death by her parents, her husband Melvin E Alberg, Daughter Barbara J and Son in law Howard J Drake Jr., Sisters and Husbands Dorothy and Alfred Henning, Lydia and Virgil Byerly, Brothers and Wives Bernard and Marion Gatterman, Clifford and Hellen Gatterman, Sisters in law and Brothers in law Edna and Roman Koebe, Elaine and Melvin Alft, Audrey and Robert Saeger, and Duane Alberg.

Mass of Christian burial will be 11AM on Saturday, November 7, 2020 at St. Francis Xavier Catholic Church.   Fr. Mariadas Vallabhaneni will be officiating.  Visitation will be from 9AM to 10:45AM at Waid Funeral Home on Saturday, November 7, 2020.  Burial will be in St. Francis Xavier Catholic Church Cemetery.

Social distancing and masks will be required in the funeral home & church.

To order memorial trees or send flowers to the family in memory of Alice Alberg, please visit our flower store.