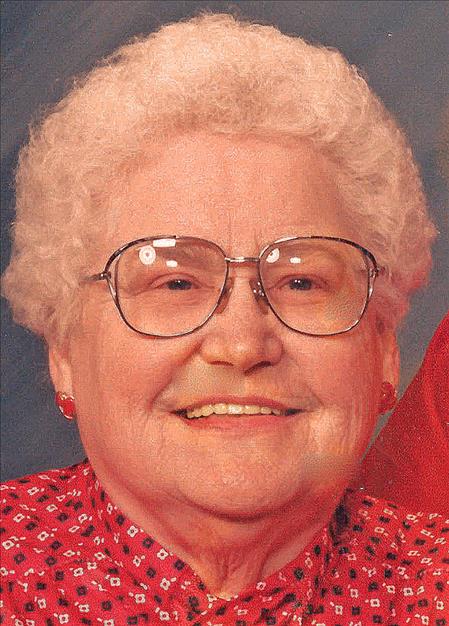 Airabell L. Beyer, age 90, of Merrill, peacefully passed away on Saturday, June 24, 2017, at Pine Crest Nursing Home in Merrill, while surrounded by her loving family and under the care of Aspirus Comfort Care & Hospice Services. She was born on February 6, 1927 to the late Emmitt and Mae (Bessey) Winchell in Tomahawk, WI. She had met the love of her life, Karl G. Beyer, and the two exchanged vows on April 17, 1948 in Merrill. He preceded her in death on December 4, 2000. Airabell had retired from being a housekeeper at Good Samaritan Hospital in Merrill, after 35 years of service. In her younger years, Airabell worked at Weinbrenner Shoe Factory in Merrill. She enjoyed her side job, which was being an AR-TEX dealer, which are embroidery products. Airabell enjoyed square dancing and was a member of the "Lincoln Squares". She also enjoyed playing cards with her family and friends, Sheephead and Phase 10, just to name a couple. Airabell was a very talented woman in many areas including plastic canvas, sewing, putting together puzzles and especially drawing. She was a big John Wayne fan, and would watch his movies any chance she could. Airabell was an amazing mother, grandmother, great grandmother and great great grandmother, as well as a loved companion to her buddy "Rocky". She was a loving soul, that always put others before herself. Airabell was a strong woman that was the matriarch of the family.

She was a member at Trinity Lutheran Church in Merrill. Airabell had a strong faith and that stayed with her in her last days on earth. She will be sadly missed. Airabell is survived by her daughters: Linda Schmidt and Susan (Larry) Erickson, both of Merrill, grandchildren: Robert (Sherri) Beyer, Karla Schmidt, Heather (Tom) Olivotti and Shannon (Andy) Kane, great grandchildren: Angel (John) Huckbody, Ashley Beyer, Tyler Schmidt, Zoey, Wyatt and Kole Olivotti, Brock Erickson and William, Breanna and Coraline Kane, great great grandchildren: Alexa, Ellie and Amaya Huckbody, sister-in-law: Connie Winchell, special children: Lenard Kretschmer of Rockford, Illinois, Joseph Kretschmer of Merrill, Mae Kretschmer of Tomahawk, Norma Schroeder of Merrill, Cheryl Rampart of Jackson, Mississippi and Phyllis Millenbah of Wausau and several nieces, nephews and friends. She is preceded in death by her parents: Emmitt and Mae Winchell, husband: Karl G. Beyer, grandson: Timothy Schmidt, son-in-law: Robert Schmidt, sisters: Ardena Hanson, Frances Kretschmer, Iva Qualley and Audrey Tobias, brother: Stillman Winchell, twin great granddaughters and special child: Gloria Dorger. Funeral Services for Airabell will be held on Friday, June 30, 2017 at 11am at Trinity Lutheran Church in Merrill. Lay minister Bob Schneider will officiate. Visitation will be held on Thursday, June 29, 2017 from 4pm-8pm at Waid Funeral Home and again on Friday, June 30, 2017 from 10am until the time of the service, at the church. Inurnment will take place in the Merrill Memorial Park cemetery at a later date. In lieu of flowers, family requests that donations in Airabell's name be directed towards either the Relay For Life in Merrill or the Lincoln County Humane Society. Airabell's family wishes to thank the staff and volunteers at Pine Crest Nursing Home for their wonderful love and care that they have shown to Airabell over the years and to Aspirus Comfort Care & Hospice Services, for their support and compassion shown to the family. Waid Funeral Home & Cremation Service of Merrill is assisting the family with arrangements. Online condolences may be made at www.waidfuneral.com.

Please click here to view the video tribute
To order memorial trees or send flowers to the family in memory of Airabell Beyer, please visit our flower store.